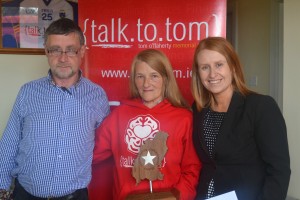 When Liz O Flaherty lost her 25 year old son Tom to suicide 2 years ago, it triggered a chain reaction of emotions for her. The initial shock of the sudden loss settled into trying to understand why this had happened to her outgoing son Tom.

By all accounts outwardly Tom had everything to live for. He had just qualified as an electrician. The Gorey Rangers U11 team he coached had just won a cup and he was over the moon. He displayed no signs to his family that signaled his pending fate.

In the days that followed his passing, Liz became acutely aware that her family weren’t the only family touched by mental issues. People approached her at the funeral and confided that family members had depression, some as young as 7 and 8 years old.  They didn’t know where to turn for help.

In answer to this need, Liz , her son Conor, her brother Ray and his son Adam founded “Talk to Tom” in July 2012 . Talk to Tom is a drop in centre located at Fort Road, Gorey where help is at hand for anyone that needs to talk and see trained Counsellors.

A charity shop located on St Michael’s Road helps fund the running of the centre.

Out of terrible tragedy, a service providing essential support to those in need is borne. Well done to Liz for making a positive contribution to her community.