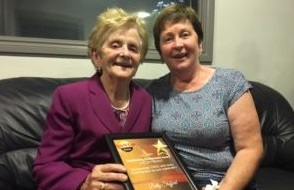 Congratulations to Betty Stafford, Chairperson of the Bannow & Rathangan Show who was selected as the June winner of the South East Radio Talbot Hotel Outstanding Achievements Awards.

The Bannow & Rathangan Show started in Littlegraigue in 1949 and now attracts crowds of over 15,000 on the second Thursday in July in Killag each year. It takes a very big community effort with over 500 people working voluntarily for the good of the Show, to allow people to enjoy rural Ireland at its best. The Show motto is ‘’A Fun Day Out For All The Family’’

The Show is broadening with volunteers from many parishes. The show in 2017 was again blessed with fine weather. Four generations of Betty’s family were present including her Mam who is 90, her daughters and her four grandchildren.

The build up for the following year starts the day after the show. There were 50 children picking up papers, who Betty thinks will form the Show Committee of the future. There were also 60 adults on site dismantling and getting the site back into a green field within twenty four hours.

Betty was overwhelmed when she was surprised by family and friends on the Morning Mix programme on being chosen as the June South East Radio Talbot Hotel Achievement Award Winner. She was ‘gobsmacked’ and accepted the award with pride, but dedicated it to the Bannow & Rathangan Show Committee. It is the committee, helpers, sponsors and exhibitors who make the show the success that it now enjoys, and she also had a special thanks to her husband Anthony and her family.

Betty’s Late Dad, Kevin was one of the founding members. Her Mum, Kathy was a Furlong from Littlegraigue, so the show has always been an important part of their Summer. Betty helped out in Littlegraigue. When the Show moved to Killag in 1980, Betty got involved in the secretarial end of the Home Industry, alongside her sister Ita, and became Chairperson in 2007. To see the show become so successful is very heartwarming and is testament to the wonderful committee who work tirelessly to promote and develop the show, which is now one of the major attractions of the Summer in the South East.

There is never a fuss with Betty. She is a great role model to all and is willing to put her hand to any task, big or small.

In addition to her work with the Bannow & Rathangan Show, Betty also found the time to volunteer in her own parish, Clongeen.

Betty became involved in Ladies Football in the 1990’s when her own daughters played and was Chairperson of the Clongeen Ladies Club for many years along with serving as County Secretary of Wexford  Ladies Football Board.

Betty was also involved in the community of Clongeen and acted as secretary and Chairperson of Clongeen Parochial Committee for many years.

As a tribute to their sister Celine who died from cancer in 1992, Betty and her family were involved in many successful fund raising ventures for Hospice Homecare.

Betty is now retired from teaching and from her duties on the parochial committee, allowing her more time to organise the Bannow & Rathangan Show, which continues to grow and prosper each year.