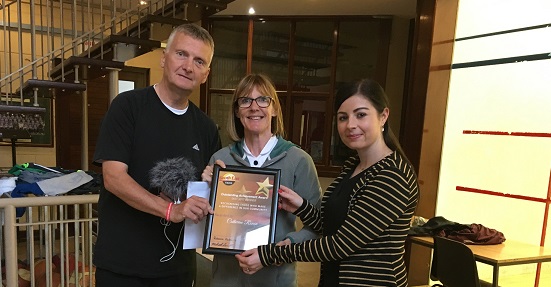 Catherine Power Ronan from Camblin, New Ross is often asked “how do you do it”?

A mother of 4 girls now entering their successful adult lives, and two entering examination years.  She has been involved as a volunteer in all of their school productions and sporting activities. She continues to co-produce the productions for Our Lady of Lourdes and CBS secondary schools , and was involved in New Ross Swimming Club as a volunteer and a chairperson.

Whilst working as a dental assistant she also runs her dancing schools which involves hours of practice and competitions, where she has worked with thousands of young people all over the south of the county.

But as if she doesn’t have enough in her life she spends her time working in the community to support Horeswood community annual theatrical productions which raises money for charities and local causes, such as Pieta House. Raising over €15,000  for community causes.

For the last six years Catherine has produced and choreographed the Horeswood Musical Society. They have over 100 children on the stage every year because of Catherine. It started off in 2011 and has grown from strength to strength. Catherine encourages children to get involved in musicals. “They love music and its so good for their confidence, the world is their oyster”.

She supports local clubs as well as companies to fund raise for charities and their own financial survival.

In 2015 she was persuaded to develop the JFK Park run along with her United Striders.  She has led from the front as the Run director every Saturday. She is there organising and motivating the volunteers, walkers and runners. She has been the drive behind the development of other volunteers and support the annual RTE Operation Transformation Programme.   She gives up every Saturday morning for the Park Run, putting up signs, giving out water, does anything that needs to be done and is the backbone of the running club. She is just amazing and thinks of everyone.

It doesn’t stop there she is vice chair of the United Striders AC and is a board member of the Apex leisure centre and Children’s officer for County Wexford Athletics and still found time to run 3 marathons in the last year and a half.

She joined the Athletic Club five years ago and has been such an inspiration to all. From the very beginning she became involved in all aspects of the club. She is such a great worker and takes it all in her stride.

She is a kind, selfless person who have influenced , supported and motivated so many people in her community and can’t say NO.

For the first time ever Catherine was really lost for words on receiving the South East Radio Talbot Hotel Outstanding Achievement Awards. Catherine said she loves the stage, acting and running. She is a great motivator and gives her time selflessly, saying its all about community spirit. Well done Catherine on being such a deserving winners.