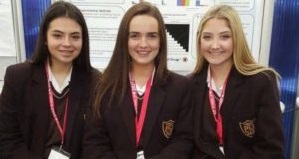 Sadbh Cullinane, Amy Richards and Rebecca Thomas, transition students in the Loreto Convent Wexford conducted a survey on French and Irish People, comparing their knowledge and attitudes towards antibiotics and resistance.
They set up a survey on ‘Survey Monkey’ and circulated this through Facebook and got over 1,400 responses. They statistically analysed their survey using various mathematical statistical tests with the help of Dr. Jim Grant. They then wrote up their report and presented it at the Young Scientist Exhibition. They were surprised to see that French people were less knowledgeable than Irish people and tended to misuse antibiotics more.

They learned that people used antibiotics for viral infections when they should only be used for bacterial infections. They said the Young Scientist Exhibition was a wonderful way to meet so many like minded intelligent people.

From their project they learned that people had little knowledge about the correct use of antibiotics. People do not realise you don’t just take half a prescription of antibiotics until you feel better,  you have to complete the full course. They received highly commended in the Social and Behavioural Category receiving the green ribbon award.

On Antibiotics Awareness Day they spoke on South East Radio to raise awareness around antimicrobial resistance as well as to promote the correct way to use antibiotics.

Their project was published in the Academy of Clinical Science and Laboratory Medicine Converse Magazine and the Mater Medial Magazine.

The three girls have such an inquisitive nature for science and were delighted to be the Junior Outstanding Achievement Award winners for June.  Well done on such a wonderful project and bringing it to fruition. They represent not just themselves and their school but also the young people of Wexford, letting young people know that this award is out there for every young person that sets their mind to achieve.