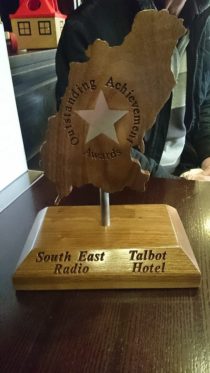 Claire Marie Malone is actively involved in the ‘Christmas Dinner For The Homeless’.  There are so many people struggling financially and nobody wants to be alone at Christmas time, so she and a committee of volunteers decided to set up a Christmas dinner for those in need.    For Christmas 2016 it was held in Glynn.  For Christmas 2017 they made it even bigger by turning it into a community dinner in Saint Josephs Community Center, Wexford, having not just the homeless but included anyone who was in need or alone.

Claire and a group of volunteers organised a big fundraising night in the Riverbank Hotel, Wexford in November.  The business community were fantastic giving amazing sponsorship.

Nickey O Brien said it is a hugh undertaking.  She said Claire is an amazing woman.  She has not been well and is also expecting a baby.  The whole of the county have come together and given so much help with their time, food and support.  They did hampers for people and families in need.  The Christmas dinner gave happiness to so many people.  On the day they had hockey tables, dolls houses, dinner and everything they could give to provide a memorable and happy day for the homeless.  Some people were too embarrassed to come to the center so they drove around to the homeless with food.  She has two wonderful children who spent Christmas day with Claire and who also got very involved at the dinner for the homeless.

Claires children’s father Michael passed away in 2015 and they ended up homeless for Christmas.  Claire was brought to hospital with lung disease.  Her children were being managed between friends and it was that which encouraged her to find Wexford People Helping People.  Claire volunteers with Wexford Housing Action Group to help the homeless. This allows her to help so many more than just those affected by the housing crisis.  She then decided to begin the Christmas Dinner for those in need every Christmas Day and “will continue to do so to make sure nobody is left alone during what can be a very trying time of year” thanks to the support of an amazing group of people and local businesses. Through the group she has been able to assist so many, whether it is just someone on the end of the phone to listen or to provide food, advocacy or whatever a family needs.  The support from everyone has been amazing.

There is only one emergency Bed and Breakfast in Wexford town, Oslum House and the Refuge center.  They are giving out tents every week and there are other agencies that are doing the same for homeless people. Some people are going from house to house to house….. to ‘sofa surf’ as they have nowhere else to go.  Claire battles on because she has two children that need her and because of the help she received when she had nowhere to turn to, it is now her goal to help other people do the same and make life worth living again.

Claire said this is going to be an annual event and if people would like to help please phone 085-8256235.  “Now she is definitely not alone”.  The people of Wexford have spoken and Claire was so emotional on receiving her July Outstanding Achievement Award.   She is selfless in her own community.  Her message to the homeless is ‘know that you are not alone, just reach out to Claire and the other volunteers who are there to help’.