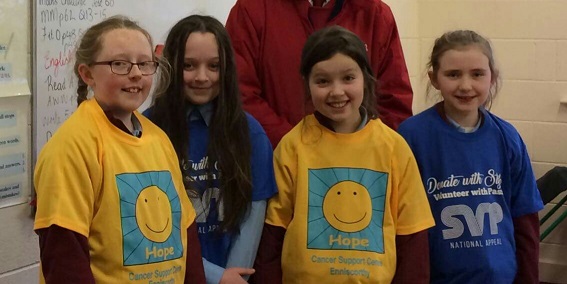 The girls have been working on all their Christmas goods since early October – even at Halloween they were making Christmas decorations.

These 10 and 11 year old girls raised €637 at Christmas for the Hope Cancer Support Centre and Saint Vincent De Paul through the stall at Bunclody market and a school raffle. They inspired their classmates & siblings to help by making crafts and using piggy-bank money to buy raffle tickets!

The girls have many other achievements for their young age:

When Ailbhe was age 8 she cut 10 inches of her hair for the Little Princess Trust (LPT, who make wigs for kids with cancer). She raised €700 in sponsorship for LPT and the Childhood Cancer Foundation.

In 2015, Ailbhe was a National Winner in a HSA competition and helped write & illustrate a book that was sent to schools & libraries to promote construction safety awareness.

Ailbhe & Cora are avid chess players. Ailbhe was the first girl in her school to top the chess league.

Amy is a gymnast and won a competition in December, while fundraising.

The girls were in shock when they found out they were the December South East Radio/Talbot Hotel Junior Outstanding Achievement Award winners.  They thanked their teacher, the principal and their class for helping to get everything ready for the market.  They also thanked the town and local shops for getting behind them and donating hampers and boxes of chocolates for their raffles.

Their teacher said that the Management, staff and pupils of the school were so proud of the girls.  What a wonderful achievement.