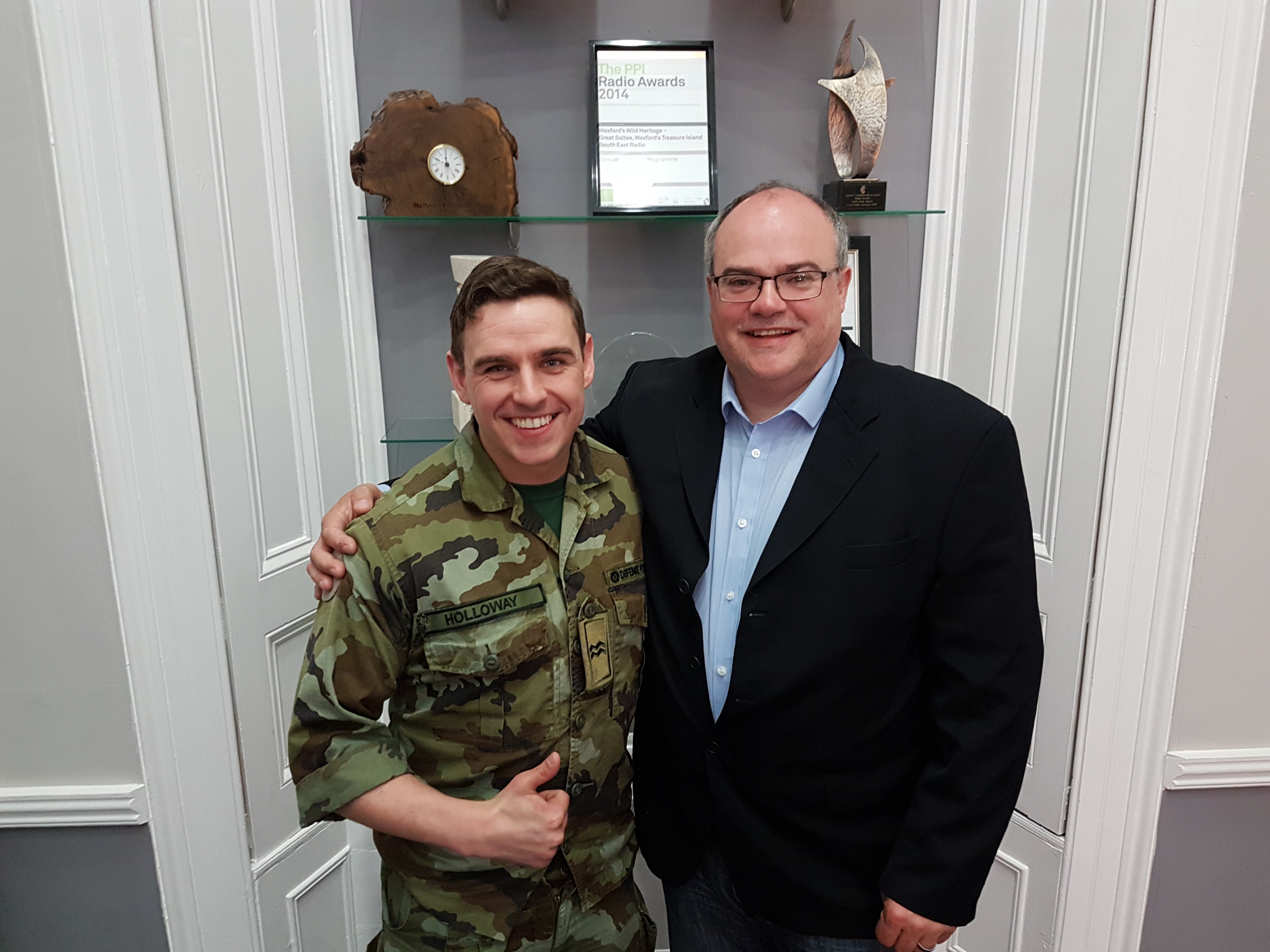 This is a story that went National and International and shows how the emergency services can work together.  During Storm Emma, Logan Shephard’s Mam Louise from Cleariestown, made a priority call to the HSE for medical emergency care for her son and that he would need to be brought to Hospital.

Ambulance Paramedic, Declan Cunningham had finished his shift and was off duty when he received a call from Defence Force Corporal, Steve Holloway asking if he could come to help.  When they left for Cleariestown they did not realise how difficult the task would be.  But once they had made the commitment to go, there was no turning back. The road became totally impassable and they made a decision there and then to help Logan and they would make the rest of the journey through snow drifts by foot.  Logan’s mam Louise, with no power or heat, had already left her house to meet Declan and Steve. They were very relieved when they saw Logan and his mam. They trudged through the snow drifts, taking it in turns to carry Logan.  He had just come back from Crumlin Hospital and had complex needs.  They had to be extra careful carrying him as he had been through various operations over the previous months and they were also worried about infection.  The best place for him was the hospital as his immune system was very low.  The two services worked together and almost four hours later, they arrived exhausted and relieved at the hospital, the safe destination for Logan.

Steve has worked in Central Africa, Chaad and twice to the middle East and said he had a similar feeling, that he just had to keep going.

The Minister of Defence congratulated them on their endeavours that night and said everyone was very proud of them.  Steve said there was such a sense of community during storm Emma. Declan said everyone helped each other from coast guards to local farmers.

Steve and Declan pushed the boundaries out and went beyond what anyone would expect from any human being, showing such bravery and determination.  Because of this they were rewarded by jointly becoming the South East Radio/Talbot Hotel Outstanding Achievement Award winners for March.  There were so many family, friends and work colleagues that arrived in the South East Radio studio to surprise Steve and Declan.

Martin Dunne, Director of the National Ambulance Services said congratulations on a job well done.  Stephen and Declan went that extra mile, particularly in treacherous weather to have made a decision to walk in extremely bad conditions for four miles….. to put the patient first is extraordinary.  They have created a template for the future where two agencies can work together in an inter-agency response to a medical emergency.

Declan has been involved in voluntary work since the late 1980’s, as a fireman he volunteered with local schools to highlight the importance of fire safety. On many occasions he volunteered with the Wexford Fire Service washing cars and a sponsored breathing apparatus walk to raise money for local charities.

After meeting some of the patients in the Children’s Hospital Crumlin, he took part in a local triathlon raising €650 for the hospital.

After delivering a baby at the side of the road he decided to make a career change and went on to become a paramedic, because he always wanted to make a meaningful difference within his community. Declan have also progressed his paramedic career by becoming an Advanced Paramedic which gives him a wider scope of practice and knowledge which he uses daily to improve the care and treatment of people in his community.

He took part in the Wexford Cardiac First Responders voluntary group, because he know a Cardiac Arrest can happen to anyone, anywhere, at any time and with a little help, a patient’s chance of survival can be greatly increased.

He has proudly served his community for over 30 years, between to Fire Service and the National Ambulance Service and hopes to serve it for many more years to come.

Steve Holloway is taking part in a sponsored charity bare foot walk  called “Walking on Ice”. This is a one mile walk along the famous Auschwitz train line to help raise money for An Choill Bheag,  Ballmitty National School Autism Unit which takes place on the 22nd of January in Poland, where temperatures are expected to be between -3 to -6oC.