Sadly our esteemed colleague and friend Stephen Dee passed away suddenly on Thursday 19th December 2013. His passing has left us deeply shocked. 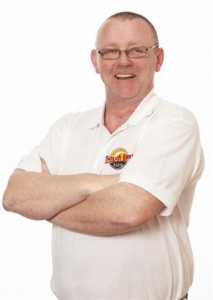 Stephen was one of the first presenters on South East Radio almost 25 years ago. He left us for a short time to pursue other passions in his life but returned again in 2011 to present South East Radio’s Breakfast show.

He made an enormous impression with South East Radio listeners in a very short time.  People got to know  Stephen and  Stephen got to know his listeners. He spoke frequently about his personal  interests. He was very involved  in the local railway in Waterford, he loved music and he enjoyed talking about his ventures in the Army Reserves.

His passing has left a huge void  in the lives of those who tuned in every morning  to hear his good humoured quips and enjoy his banter.

Whilst we will miss him in the weeks, months and years to come, his mother, brother and sister are the ones who will bear the greatest lost.

May he rest in peace.