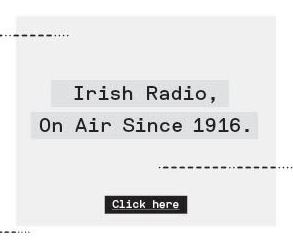 First ever broadcast from 1916 Rising re-created in new radio experience; 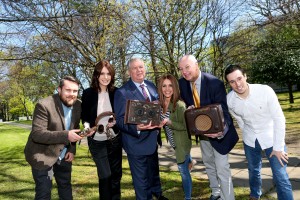 The dramatic story of the birth of Irish radio during the 1916 Rising will be re-enacted on air simultaneously by 37 radio stations nationwide on Monday, April 25 at 5.30pm, one hundred years to the original date and exact time of the declaration of the Irish Republic, Ireland’s first broadcast to the nation and the world. In a joint initiative between RTE Radio and the Independent Broadcasters of Ireland (IBI) a highly evocative 80 second morse code themed radio experience titled “The Sound of Sixteen” imagines the battling sounds and dangerous atmosphere of the times. Devised by Dublin based creative agency Boys and Girls (www.boysandgirls.ie), it also reprises the morse code message written by James Connolly and transmitted by Marconi operator David Burke.

The broadcast took place 190 metres from the GPO at what was then The Wireless School of Telegraphy at 10-11 Sackville Street (now O’Connell Street).  The full story of the drama that unfolded around the build up to the first broadcast (and subsequently) is told at www.thesoundofsixteen.ie.

Niamh O’Shea, Sales Manager, RTE Radio said:”The first broadcast was the brainchild of one of the leaders of the Rising, Joseph Mary Plunkett, a wireless expert who recognised the power of radio.He was clearly a visionary because, from its initial start, radio has become a central and much loved part of the Irish experience. It informs our national discourse and is entertaining, engaging, inspiring and maybe sometimes infuriating. Rarely ignored, for many of us it’s an always on background to our daily lives”

Lisa Ní Choisdealbha, Executive Director, IBI, said:”This commemorative radio experience reminds us of why radio is such a powerful medium in term of its reach and ability to tell a story in a highly distinctive manner. The inaugural broadcast was apparently heard by boats in the Atlantic, stations in Germany and even by Japanese fisherman. Heard within Ireland it was a credible way to connect the new Republic to the national and international community. That sensibility continues to this day – radio gives us access to innumerable memories and experiences, making us feel connected to fellow Irish citizens on a daily basis and to an even broader international community.”

83% of Irish adults listen to the radio daily with people listening for over 4 hours a day.

“A morse code message is a powerful hearing experience, brilliantly conveyed by the medium. Our agency philosophy of “Daring Simplicity” lends itself well to the creative execution of the start of Irish radio as embellishment is needed on this tale of courage and ingenuity”; said Rory Hamilton, Creative Director and partner at Boys and Girls.

The Story of the First Broadcast